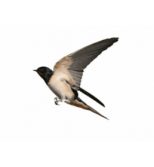 Many types of swallows can be seen darting above open fields and bodies of water across North America, snatching up bugs and insects, or swooping down to skim the surface of ponds for a drink of water. Of the eight types of swallows found throughout the country, two come into frequent contact with humans and are considered nuisances: cliff swallows and barn swallows. Buildings and other manmade structures, such as bridges, inadvertently provide excellent nestingsites for the migratory birds, which has led to a rise in swallow populations over the past few decades.

Cliff swallows and barn swallows look similar. They both display a similar steel-blue coloration on their heads, backs and wings, and lighter white or rust-colored plumage on their faces, breasts, and abdomens. One main difference between the two species, however, is their tails. The tail of the cliff swallow is squared, while the barn swallow is the only bird species in the United States to possess a long forked tail.

The nesting habits of both cliff and barn swallows cause them to come into frequent contact with humans. In the wild, swallows construct their nests on cliff faces, mountainsides, caves, and in rock crevices near wide open expanses such as fields and bodies of water. Buildings, bridges, and overpasses create excellent substitutes for these natural habitats. Swallows are likely to build their nests, made of mud and crafted into either a cup or gourd shape, high up on the walls of buildings just beneath an overhanging ledge.

Barn swallows mate for life, and mated pairs work together to build their nests in which they raise their young. Large numbers of cliff swallows tend to build colonies of nests together, sometimes numbering in the hundreds, while barn swallows nest singly or in small groups.

Are swallows known to enter homes or yards?
Swallows rarely enter houses, but they like to construct their mud nests on the exteriors of buildings that overlook fields and bodies of water, such as barns and warehouses. They only stay through the spring and summer, preferring to migrate to South America during the winter months, and return to their nesting sites again the following spring. If yards have sufficient open space, swallows may fly about on the hunt for insects. Barn and cliff swallows rarely land until they return to their nests and are well adapted to hunting and eating in flight.

Do swallows harm people or property?
Neither cliff nor barn swallows harm people directly, but they can pose health hazards in large enough numbers, while their nests can cause damage to property. While barn swallows tend to nest in small groups, cliff swallows may nest in large colonies, which poses serious problems. Nesting sites directly over doorways are hazardous, as swallow droppingscan fall on people and make a mess of walkways. Nests situated above machinery or food stores in barns or warehouses can contaminate the valuable items below with both droppings and fallen nest material. Swallows also live with a type of bedbug in their nests, known as the Swallow Bug, which may bite humans and other animals.

The best method of swallow control is modifying the areas around buildings or bridges where the birds are likely to nest. A fine mesh screen made of wire or plastic and strung across the top of a building from the overhang is an easy solution. Bird spikes are also commonly used to discourage avian pests from roosting on ledges and overhangs. In some cases, completely removing overhangs works to discourage nesting swallows. The birds are usually well accustomed to humans and not easily frightened away.

Using exclusion tactics is a key part of long-term swallow prevention. One method involves installing fiberglass panels beneath eaves and other favorite roosts to make these areas unattractive to the pests. Bird netting is another option to block off prime nesting spots. Wildlife experts can determine the best swallow exclusion strategies.

Due to legal protections, trapping or killing swallows is prohibited, and a permit is required for nest removal in most states, even outside of the nesting season. If large colonies of swallows are posing a threat to personal health or contaminating and destroying property, residents of the infested area should contact a professional wildlife control expert who can implement effective swallow removal techniques in a legally acceptable manner.